Eiderdown is the down produced by the eider duck, a species found in Canada, Greenland, Iceland, Scotland, Scandinavia and Siberia. Its superior physical qualities, unique pedigree and rarity make it not only the most prized variety of down in the world, but something truly magical. Eiderdown is perfect for discerning consumers who care just as much about an object’s quality as its story, the way it is produced, traditions and its environmental impact.

Let’s start with the physical aspects. Tufts of eiderdown are held together by microscopic hooks, an adaptation which makes harvested eiderdown more durable and consistent. Tiny ‘hairs’ create even more pockets for air than regular down, making eiderdown a more potent insulator.

What’s more, eiderdown is softer and reacts more quickly to ambient temperature. The hardiness of eiderdown translates into greater longevity for your duvet. It can easily endure for 40 years, much longer than goose or duck down. In practice, a duvet’s ticking is unlikely to hold up for four decades. However, that won’t be a problem as eiderdown duvets can be renewed through a process where the down is removed, cleaned, and then stitched back into new ticking. 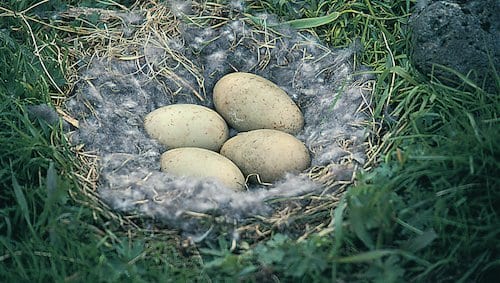 The Icelandic people have been using eiderdown as an insulating material for eleven centuries. Each year, eider ducks nest in the same place, in small colonies along the coast. There is a symbiotic relationship between eider ducks and the Icelanders who tend to their nesting grounds when the ducks are away. Villagers ensure a safe and quiet habitat for the breeding ducks and protect their nests from predators.

The eider duck has been a protected species in Iceland since 1847. The peaceful coexistence between the Icelanders and the eider duck is one reason Iceland has one of the largest populations of eider ducks. Every spring, the eider ducks return to their breeding ground. After a breeding period of six weeks, the ducks take flight, leaving behind tufts of their remarkable down.

Roughly 400 Icelandic eider farmers gather the down up, clean it, and sell the 3000 kg annual haul to different duvet manufacturers. In this way, the eider farmers carry on an ancient tradition, contributing to the preservation of the ecological balance and to the survival of the eider duck. Their efforts also grant a select few discerning consumers access to a unique luxury.

As eider ducks prepare new nests for the breeding season, they shed some of their down which forms a uniform layer of insulation. Remarkably, the special hooks in eiderdown ensure that none blows away. This way, the female and the eggs are protected against the cold Icelandic wind during the incubation period.

Eider ducks are a wild species. They require freedom and do not thrive in captivity. Therefore in order to harvest the down, the eider farmer must adapt to the lifestyle of the duck. Closely following the bird’s life cycle, the farmers move in at the end of the breeding season and gather down from the abandoned nests. Each nest contains an average of just 20 grams of down.

The annual process of collecting and processing eiderdown is very labour-intensive. The ducks are few and the effort great so there is only enough eiderdown for a small number of customers. Scarcity and quality make eiderdown a rare and exclusive luxury.

After the arduous harvest has been carried out, the eiderdown must be dried and freed of impurities in an elaborate, hands-on process. This task requires the utmost delicateness as mishandling the down can cause it to lose its clinging properties. Quality control ensures that the delivered eiderdown meets the highest standard for customers.

Eiderdown automatically adjusts to the ambient temperature. When the outside temperature rises, the microscopic ‘hairs’ adjust to lay slightly flatter. As a result, the filling force, and thus the insulation strength, decreases in the summer. When the air cools, the filling power increases again, and the eiderdown duvet becomes more insulating.

Tufts of eiderdown have neither quill nor any other hard components, so they are extremely soft and give off a unique cuddly feeling.

On average, standard down duvets have a lifespan of 8-10 years. Duvets filled with eiderdown can last four times longer, up to 40 years. To make the most of eiderdown’s extreme longevity, proper maintenance is necessary.

If the condition of the cover requires it, you can have the duvet renewed. In the case of an overhaul, the down is removed and cleaned, and, if necessary, placed in a new cover.

Eiderdown is about as far from mass-produced as you can get. Each step in its production requires manual work and lots of attention to detail. The supply is constricted by the relatively small population of eider ducks. Annually, about 3000 kg of eiderdown is harvested, making it hundreds of thousands of times rarer than regular down.

Eiderdown possesses important characteristics which are absolutely necessary for the filling of high-quality duvets. Eiderdown is respiratory-active and possesses a moisture-regulating effect to ensure a pleasantly warm and dry sleeping environment.

Explore our full range of luxury eiderdown duvets. If you need more information check out our duvet guide and do not hesitate to give us a call at 020 3129 5731. We will be happy to advise you further.

All prices include 19% VAT. CUSTOMERS OUTSIDE THE EU PAY NO VAT.Local VAT will have to be paid in the country where the goods are being delivered.

1
We use cookies on our website to give you the most relevant experience by remembering your preferences and repeat visits. By clicking “Accept”, you consent to the use of ALL the cookies.
Cookie settingsACCEPT
Manage consent

This website uses cookies to improve your experience while you navigate through the website. Out of these, the cookies that are categorized as necessary are stored on your browser as they are essential for the working of basic functionalities of the website. We also use third-party cookies that help us analyze and understand how you use this website. These cookies will be stored in your browser only with your consent. You also have the option to opt-out of these cookies. But opting out of some of these cookies may affect your browsing experience.
Necessary Always Enabled

Performance cookies are used to understand and analyze the key performance indexes of the website which helps in delivering a better user experience for the visitors.

Analytical cookies are used to understand how visitors interact with the website. These cookies help provide information on metrics the number of visitors, bounce rate, traffic source, etc.

Advertisement cookies are used to provide visitors with relevant ads and marketing campaigns. These cookies track visitors across websites and collect information to provide customized ads.

Other uncategorized cookies are those that are being analyzed and have not been classified into a category as yet.