The first step of down duvet guide is finding the down duvet size thats suits you best. Do you have a single, double, king, super king, or emperor sized bed? If you’re unsure, use this chart to find out which size duvet will best fit your bed:

For a double bed, we suggest a duvet that covers the entire width of your mattress, plus a few additional centimetres. If you are unsure which size is right, choose one that is wide enough to keep you well covered at night.

How warm is your ideal duvet? Every down duvet has a tog rating, a measure of its insulating power. The higher the tog rating, the warmer the duvet.

In the UK duvets are sold in increments of 1.5 tog, from 3.0 tog for a very light, summery duvet, up to 18.0 tog for a heavy winter duvet. The given values represent a minimum and actual values may be up to 3.0 tog higher. Because tog testing is performed on plain duvets in a lab, fitting a duvet with a cover and wearing nightclothes can effectively increase the tog rating.

There are several personal factors to consider when determining the ideal tog rating of your new duvet, such as the climate where you live, your house’s heating system and whether you generally feel hot or cold at night.

To learn more about which tog rating is best suited to your needs, visit our Choosing the Right Tog page for more information.

Many people choose to have two duvets at home —a light duvet for use in summer and a thicker one for the cold winter months. If storage or budget limitations restrict you to owning one duvet, we suggest choosing a Spring/Autumn duvet which provides the best of both worlds and can be used year-round.

Tog values on Downduvet.co.uk range from 4.5 tog to 15.0 tog. To help you select your ideal duvet, refer to this list:

The higher the quality of the down, the more insulating the duvet. The quality of down is determined by its size and elasticity.

We have found that most people want a duvet which is light but will still keep them warm. Down offers more insulation while taking up less space than feathers or alternative fillings, making it the perfect material for light, warm duvets. For this reason all of our duvets contain at least 90% down.

Learn more about how we measure the quality of our down by reading about fill power and down varieties. 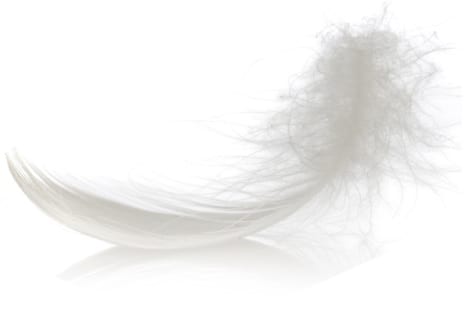 Feathers don’t insulate as much as down clusters, but feel heavier

Ticking is the outermost layer of a duvet, the fabric which encases the down filling. Good ticking has to be strong and tight so that dust does not get in and feathers don’t stick out, while remaining soft and supple to ensure comfort and provide a great night’s sleep.

Cotton is most commonly used for ticking material for down duvets. Close-woven cotton allows for ventilation while keeping the filling secure.

We measure the quality of duvet ticking in Ne. A Ne value of 1 means there is one pound worth of yarn in a piece of yarn 840 yard long. The denser the threading of ticking, the higher the Ne value and the more comfortable the duvet. In the interest of selling only the highest quality products, we only offer down duvets with ticking of at least Ne 60.

Learn more about ticking and how its quality is measured.

After finding out what matches you from our down duvet guide, browse through our range of down duvets and select what features suits you here!

All prices include 19% VAT. CUSTOMERS OUTSIDE THE EU PAY NO VAT.Local VAT will have to be paid in the country where the goods are being delivered.

1
We use cookies on our website to give you the most relevant experience by remembering your preferences and repeat visits. By clicking “Accept”, you consent to the use of ALL the cookies.
Cookie settingsACCEPT
Manage consent

This website uses cookies to improve your experience while you navigate through the website. Out of these, the cookies that are categorized as necessary are stored on your browser as they are essential for the working of basic functionalities of the website. We also use third-party cookies that help us analyze and understand how you use this website. These cookies will be stored in your browser only with your consent. You also have the option to opt-out of these cookies. But opting out of some of these cookies may affect your browsing experience.
Necessary Always Enabled

Performance cookies are used to understand and analyze the key performance indexes of the website which helps in delivering a better user experience for the visitors.

Analytical cookies are used to understand how visitors interact with the website. These cookies help provide information on metrics the number of visitors, bounce rate, traffic source, etc.

Advertisement cookies are used to provide visitors with relevant ads and marketing campaigns. These cookies track visitors across websites and collect information to provide customized ads.

Other uncategorized cookies are those that are being analyzed and have not been classified into a category as yet.